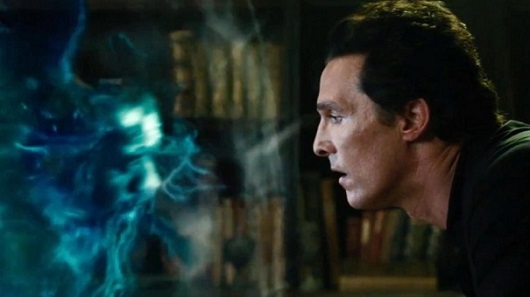 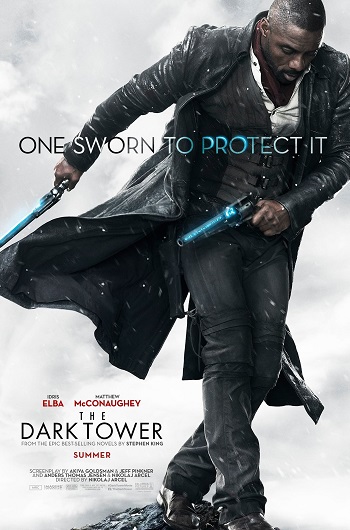 VAULTED TREASURES: MOVIES AND MORE YOU NEVER KNEW ABOUT, YOU FORGOT, ... OR FORGOT TO LOVE THE FIRST TIME AROUND. IT'S OKAY, WE'LL FORGIVE YOU!

And speaking of "forgive", forgive me if this sounds a tad arrogant. It isn't, I swear!  It's more a matter of "I just really don't care!". Now, "Is that any better?" you may ask. Hell yeah, it is! Arrogance is self-aggrandizingly insufferable. "I don't care" simply means one's opinion concerning what one likes and dislikes is based upon one's own decision making process and / or (for whatever random reasons in that infinitesimal universe) one's predilections, tastes and what fires / triggers one's own imagination regardless of the tastes, predilections et al of everyone else out there, ... or even Rotten Tomatoes' (they themselves admit) unscientific aggregate scoring process. That kind of positive "I don't care" mentality (as opposed to the negative and often self destructive kind) is not only "okay", I've always thought it downright necessary. 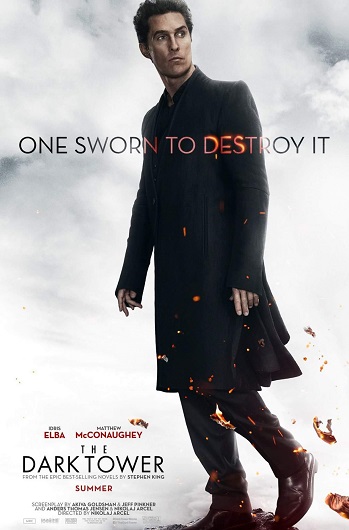 What many people just can't seem to fathom however is that this doesn't mean my take is "right" while someone else's is "wrong", ... or vice versa. It just means (for whatever reason) my take is MY take, and I enjoy that take just as another should enjoy THEIRS without caring what I think or feel about it, or why. That said, this isn't any kind of "review" or "apology" or "debate bait" concerning summer 2017's film adaptation of THE DARK TOWER as directed by Nikolaj Arcel and based upon the series of novels by Stephen King. As I said, I really don't care whether you liked it or not, ... which isn't the same as "I don't care that you have an opinion". It's important and necessary that you do. Now, as long as we're all clear and cool on that ...

I picked up THE DARK TOWER on Blu-ray the other day, and did a rewatch earlier tonight. Twas the night after Christmas, and all through the house, Craig had been so exhausted from the previous days activities he fell asleep on the couch. Hey, that rhymes! He awoke, popped the Blu into the player, cranked the sound (an awesome 5:1 mix) and actually liked it even more now than he did when he saw it theatrically - which is saying something because he really dug it back then too. Now, for those who say, "It isn't Stephen King's DARK TOWER books!", well, yeah, no sh*t Sherlock! Oh, and this part is a little arrogant - fair warning. The first DARK TOWER novel "The Gunslinger" (which King envisioned as a cross between Tolkein's LORD OF THE RINGS stories and Leone's "Dollars" trilogy of Spaghetti Westerns) was published in 1982 before some of you out there reading this were even born. So, re-phrasing Danny Glover in LETHAL WEAPON, "I was familiar with THE DARK TOWER before (some of) you were even an itch in your Daddy's pants". Always loved that line. 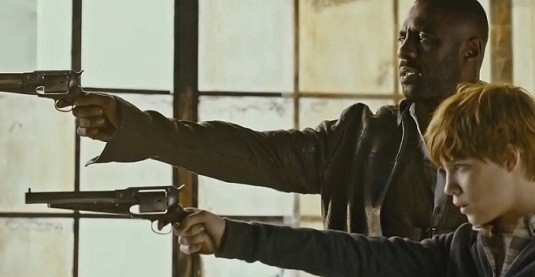 At any rate, the film was never intended by Stephen King, producer Ron Howard, producer / screenwriter Akiva Goldsman and dir. Arcel as a literal adaptation. Even if it had been blessed with a $400 + million budget (which it wasn't - it was produced for a much more reasonable $60 million, which is considered a pittance by today's standards) it would have still been impossible as there are to date nine novels in THE DARK TOWER series (well, technically eight novels, a short story and a few comic books) which collectively consist of nearly 5,000 pages of numerous characters, timelines, subplots and more. No, the intent of all involved in this film (yes, King included!) was to fashion an all new "introductory story" - actually a sequel of sorts for "those who came in late" - which takes the audience from contemporary New York to parallel "Midworld" then back again, and to along the way integrate elements of the novels. Then in various later TV mini-series to go back and examine / focus / turn the microscope on those "integrated elements" by then literally adapting the individual books utilizing the aforementioned TV mini-series (or limited series) format so popular today with outlets such as Netflix, Hulu, CBS All Access and others  - these outlets more conducive to the kind of long form, multi-location / multi-era / multi-character storytelling one tends to find in a series of such detailed novels. Just so you know, the plan was to do that rather than vainly attempt to trim and cram nine books into a single film or even a film trilogy. That said ... 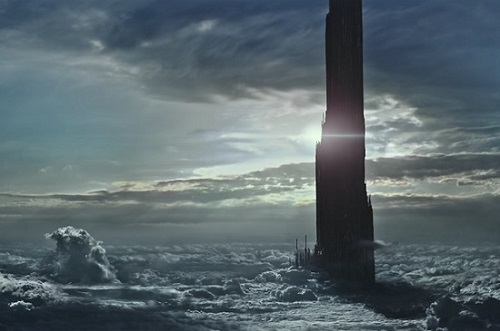 Even critics who don't care for this introductory DARK TOWER filmic chapter acknowledge that Idris Elba, Matthew McConaughey and young Tom Taylor are great as (respectively) "Roland - The Gunslinger", "Walter - The Man In Black", and "Jake - The Pure Shine". And if those who can't get around the fact that "this and this and this wasn't in the movie" can have a little patience, wait for those later TV incarnations, and get passed years of preconceived notions which arguably no film could realize, they'll discover more than a few precious cinematic gems in director Arcel's (let's call it) "extrapolation" of King's legendary multi-dimensional adventure yarn. 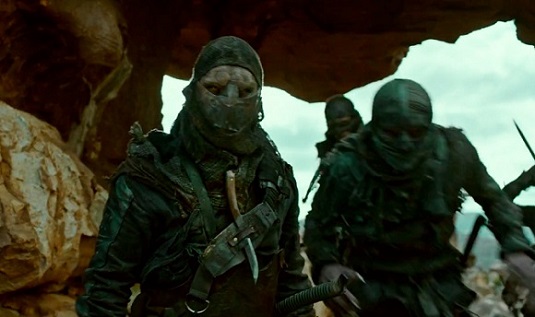 The growing father / son relationship between Roland and Jake is particularly engaging, extremely touching and (yes, while it may sound weird in the context of discussing a fantasy story) very real. Tom Holkenborg's epic orchestral score is a magnificently heroic wonder for the ears and the heart. The cinematography and production design are "old-school" painterly gorgeous. And the special FX are impressive (especially the virtual landscapes of "Midworld") without being distracting. For those more taken by action, the battle sequences are sufficiently bad-assed in both staging and execution. And Elba truly emerges as a towering new brand of mythic action hero. 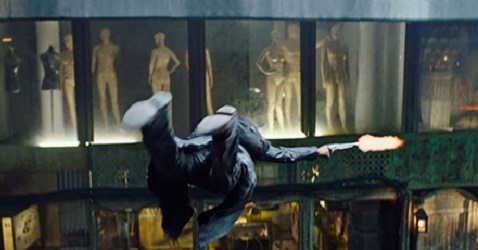 For those familiar with King and the powerful subtext which runs through the thematic central nervous system of soooo many of his stories - the one wherein young people who are abused, bullied, and / or who lose parents through divorce, death, abandonment and more, then respond, rebel and fight back (sometimes in a positive manner / sometimes in a negative one) against a cruel adult society ... .  Well, yeah, you'll notice that recurring "save the children" motif is just as powerfully at the core of this film every bit as much as it is the narrative and character fulcrum of CHRISTINE, FIRESTARTER, THE BODY (aka STAND BY ME), IT, CARRIE, CUJO, CYCLE OF THE WEREWOLF (aka SILVER BULLET), THE TALISMAN, THE SHINING (along with it's recent sequel novel DOCTOR SLEEP) and others. 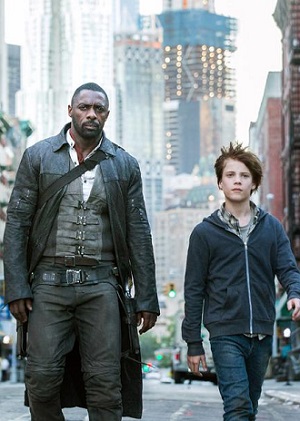 Well, let's maybe say it's at least there for those who can see around the fact that their favorite scene from THE DARK TOWER books maybe didn't make it into the narrative cut of this introductory chapter. Me personally, I'll take the subtext, characters and thematics (as that's what truly makes King "King") over the monsters and interdimensional bells and whistles any day of the week, ... as much as I DO happen to love all of those bells and whistles in and of themselves. At any rate ...

Plans are still on for the TV continuation, and Elba and Taylor are at present slated to reprise their roles. That could change of course depending upon how long, and under what circumstances, the TV incarnation takes to get into gear. And while McConaughey didn't commit beforehand to return as The Man In Black (time and contractual matters will later determine such), he was mentioned as a favored candidate by some to portray "Randall Flagg" (an earlier physical representation of the "Man In Black" character) in the still-in-development big screen version of King's THE STAND.

Oh, and in keeping with the Leone western parallels, McConaughey's character is a deliberate (albeit satanic) knock-off of Lee Van Cleef in opposition to Elba's "Eastwood / Man With No Name" - right down to both McConaughey and Van Cleef always being decked out from head to toe in black. For those familiar with King's 1984 "medieval" fantasy novel THE EYES OF THE DRAGON, you'll recall that "Flagg" is the central villain of that one too. And in keeping with the more Joseph Campbell-like mythic crossover elements within THE DARK TOWER (hints of which also even pop up in Stephen King and Peter Straub's novel THE TALISMAN, by the way), we also know that the Gunslinger's pistols are fashioned from the metal of Arthur's Excalibur sword. Yeah, there's a lot of inter-connectedness going on here. 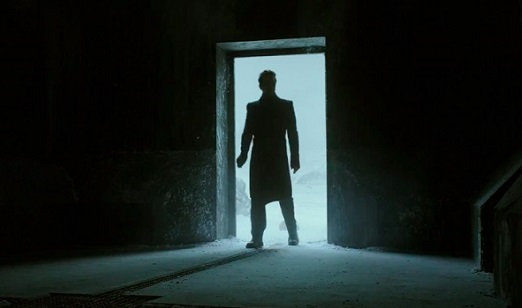 Speaking of such - there's a prize of serious "Grade A" braggin' rights to anyone who catches the many Stephen King Easter Eggs (visual references to CHRISTINE, CUJO, THE SHINING, IT, 1408 and more) scattered throughout THE DARK TOWER film. 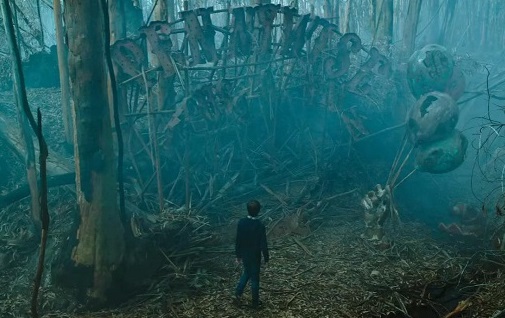 At any rate for these reasons and more THE DARK TOWER is a film which gets better, and damned more impressively deep, with each viewing. And, as stated at the opening of this piece, I really don't care what you say, ... though I'll respect it. But then that's how it should always be anyway, right?

Think I'll do yet another early A.M. viewing. In the meantime ...

"Never forget the Face of Your Fathers". And ... 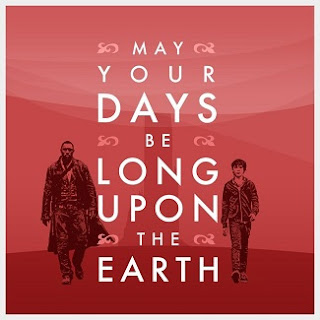 Explore The GullCottage / Sandlot @
http://www.gullcottageonline.com
Posted by Craig Ellis Jamison at 5:59 AM No comments: