THE ADVENTURES OF TOM FOOLHARDY: VOL 1 -THE $1 STORE LITERARY SOCIETY - by CEJ

VAULTED TREASURES: MOVIES (and this time books) YOU NEVER KNEW ABOUT,
YOU FORGOT, ... OR YOU FORGOT TO LOVE MORE THE FIRST TIME AROUND! 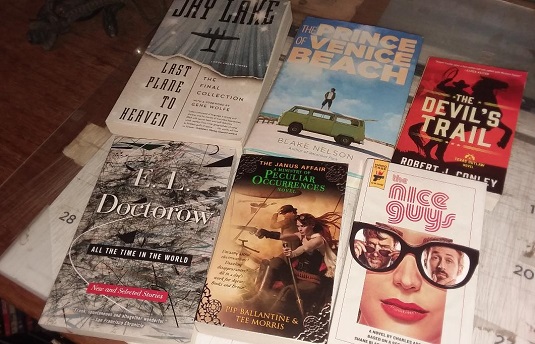 No secret, and sure as hell "no shame in our game", as to how I feel about the Best Buy / Wal-Mart / Rite Aid movie cheapie bin. It's a vaulted freakin' treasure trove which in a recent MOVIE SNEAK PODCAST episode we also referred to as a "cinematic well of the souls". One of the few remaining places where, since the local video store went the way of the Dodo, for less than the price of a hot dog at the movies a dyed-in-the-wool film fan can not only expose themselves to an "off the beaten track" film (or two) you won't even find on Netflix, Epix or Amazon Prime, but you can just own the damn thing too, and not ever have to worry again about it being deleted next month from a streamer's queue because they've reached the summit of their bandwidth or their contract with a particular studio goes kaput!

Sadly for many of us the old-school book shop has in recent years faced a similar E.L.E.-like cultural demise. But if there's a "Cheapie Bin" version of a treasure trove of "off the beaten track" books one can delve into these days on a budget it's surely your local lowly Dollar Store.


Don't laugh! Over the years while picking up a few extra wine glasses for a party, gift wrap, glowing eyes for a Halloween display, pen lights or any of a dozen other things, I've come across more than a few damn good novels - hard covers, trades and paperbacks - for one slim buck which I later saw selling online or on a Barnes & Noble clearance table for $5 - $10.

I grew up in libraries, book stores, flea markets and Friends Of The Free Library annexes. And to me there's nothing like "taking a flyer" on something you've maybe never heard of ... but it just sounds so damned fascinating. I'm all for streaming and eBooks and what have you. But there's nothing like browsing. And, uh, uh, sorry, "browsing" online isn't the same as taking the time to physically thumb through pages and volumes.

There's a chill Zen magic in just sitting there, unbeholden to the clock (and that's what a damn good book blurb will do for 'ya), reading flaps or rear covers and deciding that "Ah, what the hell!" for a dollar you can afford to take the risk. In fact you'd be stupid not to. Think of it as a more mircocosmic (and much safer) version of skydiving, bungee jumping or leaping off a cliff into the waves.


Reminds me too of working in a video store back in the 80s / 90s and doing "Bad Movie Night" - where we'd try to find what had to be the worst film ever made. But, no b.s., I swear 7 times outta 10 instead of MYSTERY SCIENCE THEATER 3000-ing the evening's choice to dusty death, I and others ended up discovering something we'd love for the rest of our lives. 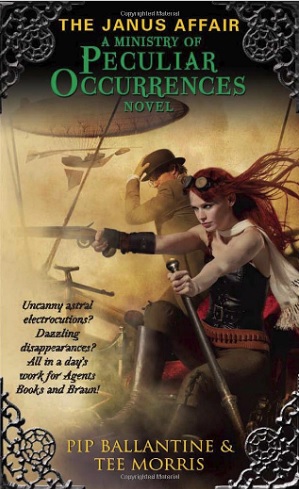 The Paperback Exchange at the Willingboro Public Library, and the book shop at the no-longer-in-existence Pennsauken Mart were manna from lit heaven while growing up. Both where in South Jersey, though I'm sure you had your version of each as well. For example at the Mart you could pick up four or five paperbacks for a buck because they tore the covers off of  'em. Remember that? Anyway, nowadays at least once every month (and usually more often during the summer, go figure) I'll pick up a handful of books from the 'ol Dollar Store. I did so the other day, and the most recent haul consisted of ...


* THE JANUS AFFAIR - Never heard of this one before, but it seemed like a blast so I snagged it. Later looked it up and discovered it's the first entry in a series of cyberpunk-ish novels called THE MINISTRY OF PECULIAR OCCURENCES by New Zealand author Phiippa Ballantine. Sort of a Victorian era X-FILES it reminds me of Gavin Scott's early 1990s gem of a TV series THE SECRET ADVENTURES OF JULES VERNE. Sounds like a good time.

* THE PRINCE OF VENICE BEACH (never heard of it before either) is a 2014 "Y.A." novel by Blake Nelson. From what I understand it features sort of a male Nancy Drew type - a So Cal teen beach bum who becomes a local sleuth and ends up smack dab in the middle of the most Rubik's Cube-like of Raymond Chandler mysteries. Coolness! 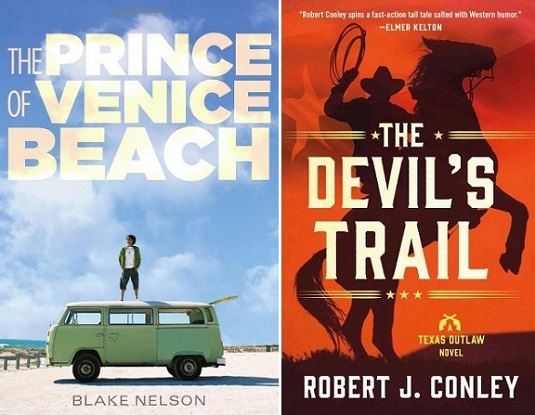 * THE DEVIL'S TRAIL (2002) by Robert J. Conley. Another new title and author never before on my radar. But there's nothing like a good pulpy western fast read. And this 'un (sorry, couldn't help it!) at 250 pages looks like such a fun ride. It's about the "world's scrawniest gunslinger" who became an outlaw at 13 when he shot the man who shot his beloved dog, "Farty". Then after adventures on both sides of the law he ends up part of a posse out to collect the bounty on a legendary criminal. In the process he becomes a legend himself and, from what I gather, goes on to star in a few more novels. 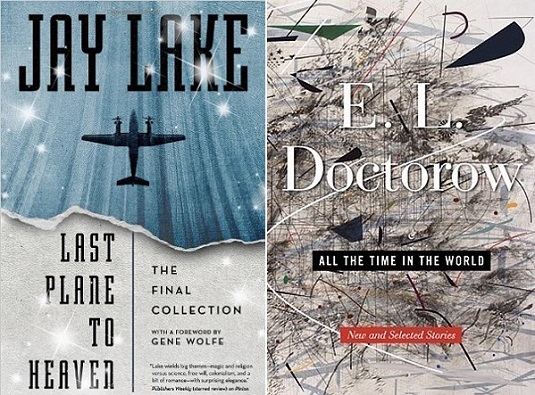 * LAST PLANE TO HEAVEN (2014) is a collection of short stories by sci fi author Jay Lake. And what more can you add to that. In the words of the late great Stan Lee ... "'Nuff said!".

* ALL THE TIME IN THE WORLD (2011) is a collection of shorts by E.L. Doctorow.  And I'm seriously looking forward to this as I grew up a big time fan of Doctorow. Yeah, I'm old enough to have been around when both BILLY BATHGATE and even RAGTIME were first published. Check out their publication dates and do the math, and that's how old I am. Yeah, man, pass the AARP card and that container of Icy Hot; take it easy on the salt, ... and oh, you kids get off my damn lawn too while you're at it. Haha! Nah, seriously me and Doctorow go waaay back. 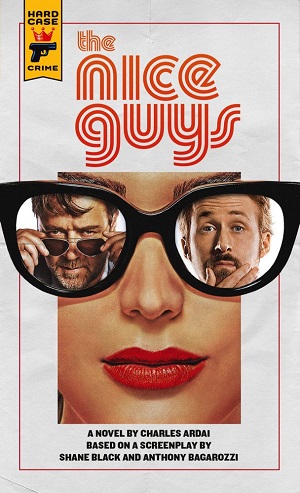 * THE NICE GUYS (2016). I love a good novelization as, if you get the perfect writer with their own literary history and voice, they'll bring a damned great vibe and / or spin to a screenplay-to-book-adaptation distinct from that of the film. Great examples include Orson Scott Card's novelization of James Cameron's THE ABYSS and pretty much anything by Alan Dean Foster (ALIEN, STARMAN, OUTLAND, CLASH OF THE TITANS).

While I enjoy the early Shane Black scripted films such as LETHAL WEAPON and THE LAST BOY SCOUT, I absolutely love his seriously pulp inspired later day ones - which he also directed - like KISS KISS BANG BANG and THE NICE GUYS. They've got that patented Black attitude, but also a "dark maturity" which only comes with age. You can't fake that. While the earlier ones had say a smart-assed sense of humor woven into the characters, narrative and dialog, the more recent ones have a sly and cynical wit burned into their DNA which I find infinitely more interesting. Think the younger bad-asses of Tarantino's RESERVOIR DOGS and PULP FICTION as opposed to the more autumnal nature of JACKIE BROWN's older, more jaded, cynical (and yes, more human and humane) main characters. Anyway, ...

Charles Ardai's a fascinating fellow in and of himself. And some might know / remember his name from various stories published in both the ELLERY QUEEN and ALFRED HITCHCOCK mystery magazines. But he's also the guy behind the "Hard Case Crime" imprint. Begun in 2004 it's a line of old-school 1930s / 40s era pulp-style novels - some of them reprints of classics and others new material by known authors imitatively writing in the old-school idiom. To date the hands-down most popular "Hard Cases" have been Stephen King's JOYLAND (2013) and THE COLORADO KID (2005) - the later of which was loosely adapted into the SyFy series HAVEN.

As Shane Black is sooo in love with old-school Southern California-style pulp fiction, I'm looking forward to what Ardai brings to his THE NICE GUYS script while adapting it into straight hard boiled detective prose. 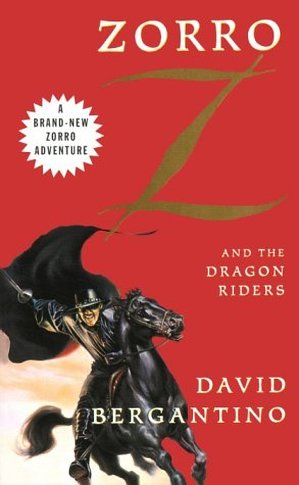 * ZORRO AND THE DRAGON RIDERS (1999 / by David Bergantino) Ultra bad-ass-ed-ness here as a wealthy landowner with political ambitions gets fed up with Zorro fighting for the people and giving the peasants hope. So, he hires from Japan four Ronin samurai warriors to track down and kill the masked avenger. They set a trap for Zorro (who is actually wealthy Bruce Wayne-like Don Diego de la Vega behind the mask) by burning and looting various poor villages - knowing that he'll show up to defend the citizenry. That aforementioned bad-ass-ed-ness (swordplay and all) then ensues.

* THE DIARY OF JACK THE RIPPER (1993 / Shirley Harrison - editor) Up until stumbling across this one about ten years ago, the scariest / creepiest books I'd ever read in my entire life were Vincent Bugliosi & Curt Gentry's HELTER SKELTER, William Peter Blatty's THE EXORCIST, and Whitley Strieber's COMMUNION. Hey, say what you will about Strieber and whether or not you think his story of alien abduction is horse pucky or not. His book is terrifyingly well written. And if it doesn't give you nightmares then you just ain't human. Anyway ...

As said those three were the scariest books I'd ever read until THE DIARY OF JACK THE RIPPER. History considers "Jack" the first modern serial killer in that he frequently contacted the local press about his crimes. And years later a diary by him was found and "authenticated". "Authenticated" is in parentheses because the genuineness of the manuscript - purportedly by James Maybrick, a London textile merchant - remains debatable. 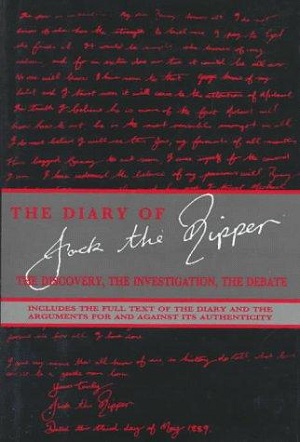 One third of the book is the diary itself. One third is a provenance by various experts / historians proving the validity of the journal. And one third is a debunking by just as many experts and historians who feel the journal is magnificently realized bullsh*t. Whether it's genuine or not, it's a damn fascinating and genuinely unnerving read. Pissed off that I loaned out my Dollar Store copy to a friend and never got it back. So, I had to re-purchase it via Amazon for a bit more. Oh, well. What're you gonna do, right?
¯\_(ツ)_/¯

At any rate considering I've run out of shelf space because of volumes by Clive Cussler, Amy Tan, Nicholas Sparks, Tom Wolfe and others, as well as a truckload of authors you've probably never heard of  ... And, oh, did you know that along those lines, in addition to a TITAN A.E. novelization there was a series of three prequel novels - each centered around the three main characters from Don Bluth's animated film? How awesome is that!? But that's something I never knew until finding one of them at a Dollar Store a few years back. Anyway, with all of that in mind ...

I've no qualms in calling the local lowly Dollar Store a buried "Well Of The Souls" treasure for great (often underappreciated) literature.

Set aside a few preconceived notions and dive in for yourself. You may be surprised at what awaits at the bottom of that chamber. As 'ol Sallah once said to Indy ...

Posted by Craig Ellis Jamison at 1:38 PM No comments: