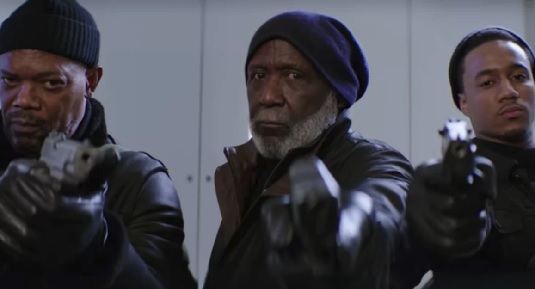 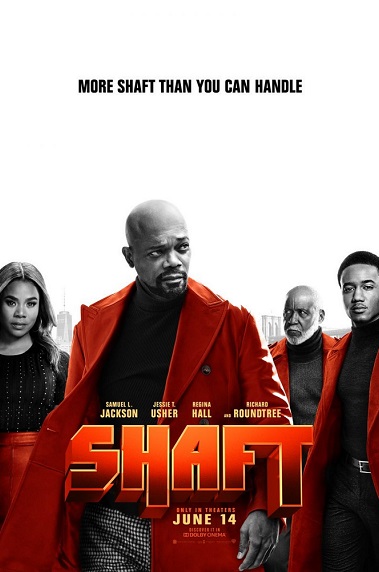 Hmmm? I guess you can call Tim Story's SHAFT "The MOONRAKER of SHAFT films" in that ... . Well, MOONRAKER is a helluva fast and furiously fun action / adventure film. It's just not a really good "Bond film", is it? In fact forget "good", it's really not a Bond film at all. And if you can get around that, and maybe not count it / think of it as a "Bond film", it's really a damn enjoyable ride. Kinda the same here. But only "kinda" as there surprisingly are, believe it or not, more than a few nuggets here which do feel like vintage SHAFT - both the John Singleton 2000 film (which I really love big time as it exercised the perfect balance in bringing the Ernest Tidyman / Gordon Parks sensibility into the new millennium with style, social relevance and supreme bad-ass-ed-ness) and the original trio of 70s era mystery / actioners.


As such when I personally heard another SHAFT film was in the works with Sam Jackson reprising his role (and with Richard Roundtree joining the cast again) I was thrilled. When I saw the first trailer, however, which for all the world seemed to turn the character into comedy fodder, I was heartbroken ... and pissed as hell! But you can't keep a good SHAFTer down (yes, I made up that word - we'll see if it catches on, haha!), and one couldn't not see it as curiosity is the mutha of all bitches to endure. Anyway, like I said, director Tim Story's new SHAFT is a heck of a lot better (and a lot less the 48HRS. / BEVERLY HILLS COP-style comedy / actioner) than expected. And there's one thing which saves it from "lame reboot hell".

It isn't that the the story is very original (because it ain't - you can see every "surprise" a mile away) or that the action is eye-dazzling (because there's really nothing new here), or that some of the humor isn't forced (because there are more than one or two scenes where it feels like the writers are trying waaay too damn hard). No, what makes this SHAFT work as a crowd pleaser is the fact that you (and yeah, I know it sounds clichéd and corny) genuinely come to love this family - three generations of Shafts (Jackson, Roundtree and Jessie Usher) with estranged mom Regina Hall trying to shield her son from her ex's "bad influence" and dangerous lifestyle. 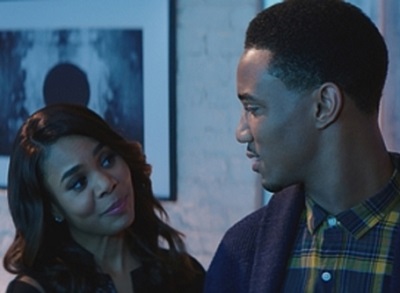 The official plot has Hall back in the 1990s moving herself and infant son away from baby-daddy Shaft / Jackson's dangerous world when a reprisal against him from New York drug kingpin "Gordito" Carrera (portrayed by Jim Jarmusch stalwart Isaach de Bankole') strikes too close to home. Years later 20 something year old "JJ" (John Jr. - played by Usher) - now an MIT grad genius and FBI analyst who mistakenly believes his father abandoned him and his mother - comes calling. Or more accurately he comes attempting to guilt trip dad into helping him get to the bottom of why a childhood friend - a former soldier with a connection to a veterans' drug treatment center - himself died of a highly suspicious overdose.

Needless to say (and like I said, you see it coming a mile away) father and son step into a LETHAL WEAPON / FRENCH CONNECTION-like quagmire of international drug smugglers and assassins hiding behind a government shield. And (surprise, surprise!, ... well, not really) "Gordito" is the mastermind behind much of it.

So, yeah, that's the superficial plot - and one which is very Ernest Tidyman-like. But any man, regardless of age, race, social upbringing or whatever, will recognize this story's creative raison d'état as actually being the father & son, love & hate, dialog / banter between Jackson and Usher, which is, notwithstanding the laughs, on-the money and emotionally accurate as all hell. You recognize the (I hate this damn word, but) truthiness of the back-and-forth whether you've actually had such conversations with your own father or son, or you only wish you had.  It rings as alternately heartbreakingly bitter, sweet and very often hilariously genuine in the final wash. And as such it (not unlike the dialog badminton between Robert DeNiro and Charles Grodin in Martin Brest's MIDNIGHT RUN) puts this film over and makes us give a damn about what ultimately becomes of this trio. Well, ...  what becomes of this quartet.

It's also very much reminiscent in some ways of the multi-generational ying & yang between Matthew Broderick, Sean Connery and Dustin Hoffman in Sidney Lumet's FAMILY BUSINESS - from which I honestly believe the script here co-written by Kenya Barish (creator of TV's BLACK-ISH) deliberately borrows more from than anything in Ernest Tidyman's original novels or Gordon Parks 1971 film. But it works - as stated earlier - "even though it's not really 'SHAFT'".

There's another awesome effin' thing this film does rather subtly and intelligently (... and hilariously too!)? It's something few of the more negative reviews making the rounds have managed to notice ... or at least acknowledge ... in their narrow minded screeds as to why if the new film fails to ape the earlier ones, it's not a success.


There's a wonderful recurring "undercurrent" debate as to whether Jackson's (and ultimately Roundtree's) Shafts are now embarrassing uber-macho anachronisms lost in the modern world, ... or among the last real men (of not only action, but of conscience, decisiveness and transparency) left in America after waves of sensitivity has turned most U.S. males into beings too fearful to do or say anything which may cause them to be "media shamed" ... even if what they may say or do is the right thing. In a clever way the film (at least as far as I read it) seems to come down on both sides, leaving it up to the audience to think about it but ultimately make up their own minds. I very much like that.

We get the expected contemporary R&B and Hip Hop songs (and updated and remixed versions of classics) along with a score by BAD MOMS, RIDE ALONG, HORRIBLE BOSSES composer Christopher Lennertz which integrates Issac Hayes' iconic "Theme From SHAFT". I mean, how can we not, right? It would be musical sacrilege to leave it out. But (for me at least) Lennertz's score ends up being more functional than creatively memorable, in contrast to say ID4, CASINO ROYALE, BABY BOY composer David Arnold's score to John Singleton's 2000 SHAFT. 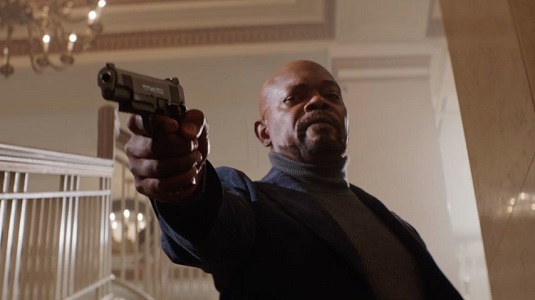 It almost feels as though Lennertz was given the edict to "give us a score which does this and this and this, and nothing more or less", and he gave it to the producers / film makers, whereas (again, as it seems to me at least) Arnold's score didn't just obligatorily infuse the "SHAFT rift" whenever Jackson kicked someone's ass up and down the street. In fact Arnold's musical take felt less like a "SHAFT score" in particular, and more like an Issac Hayes, Johnny Pate, Dave Grusin, Herbie Hancock 70s era score in general done up with contemporary orchestra and production techniques. And in so doing it brought SHAFT perfectly into the high tech 2000s, but ironically did so while remaining faithful to the same smooth retro groove of the original films.

Arnold's score holds more of a creatively loving "neo 70s" vibe (sounding like SHAFT, THREE TOUGH GUYS, TRUCK TURNER and David Arnold all at once - and film music aficionados will recall he did a similar "groove type thang" with Singleton's FOUR BROTHERS as well!), while Lennertz's feels a little more like "a good modern impersonation of a SHAFT score". Not bad at all, mind you. But just as with a Bond score, "not bad" isn't usually good enough as the music is such an integral part of what makes a genre-unto-itself like SHAFT,  Bond, STAR TREK, STAR WARS or ROCKY work.

While I'm not a fan of the more forced comedic elements in this installment (though the ones which do work are priceless! - and Samuel L. Jackson has never in his career been more simultaneously cool and hilarious in verbally dishing them out), it is director Tim Story's primary strength as a "family film" maker which brings this chapter across the finish line with it's franchise honor intact. Now, that's not "family film" as in a "for all ages" one. Hardly here! SHAFT is deservedly "R" rated. But in some respects even that at times seems forced - with characters slinging "F" bombs around when they're really not necessary. And don't get me wrong, I'm no prude. I love a good expletive-laden cop flick. But as that's not really what this film has on it's mind, the at times over-the-top verbiage does occasionally start to border on needlessly insecure overkill. Uh, uh ...


Take a look at many of director Story's other films and you'll see what I mean about how their primary strengths (as well as his as a film maker) are when he puts under the microscope the various dynamics of family - functional and dysfunctional, blood-related or surrogate. And take another look at BARBERSHOP and those two underrated FANTASIC FOUR films of his - the ones with a pre-CAPTAIN AMERICA Chris Evans as Johnny Storm / The Human Torch - for proof.

In that regard there's a quote I've always found accurate as all get-out - "There's no such thing as 'dysfunctional' family; for better and for worse there's just 'family'". And it is this sneaky / sly and (dare I say in regards to a SHAFT film?!) old-fashioned sensibility running quietly through it's central nervous system which in the end makes this, ehhh ... reboot? ... sequel? ... rift? ... on the original(s) surprisingly enjoyable. 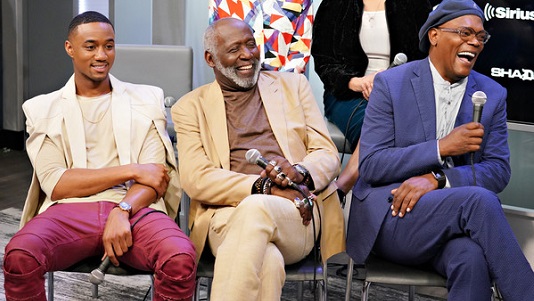 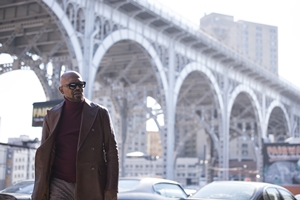 Explore The GullCottage / Sandlot @
http://www.gullcottageonline.com
Posted by Craig Ellis Jamison at 12:11 AM 1 comment: