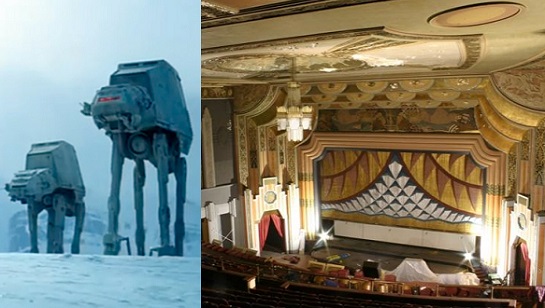 VAULTED TREASURES: MOVIES YOU NEVER KNEW ABOUT, YOU FORGOT,
... OR YOU FORGOT TO LOVE MORE THE FIRST TIME AROUND!


Hmmm? While that VAULTED TREASURES subtitle above always says "Movies you never knew about, you forgot, or you forgot to love more the first time around", this one will be a slight (let's call it) "Electric Slide" sidestep or two to the left by maybe replacing the word "movies" with "theaters".  I'm gonna try not to be all "age-i-fied" on this one. Y'know, try not to make this one of those postings which begins with "You may have to be over 30 to appreciate this". But the truth is, ehhh ... you kinda just may have to be! Jeez, sorry! But hear me out before you get that look on your face, oh "Dear Person Younger-Than-Me", because I'd be willing to bet next month's rent that you've got one of these too somewhere in your past. Maybe not the exact same kind of "one of these". I mean, I've spoken to those who had a particular video store which became the creative "trysting place" of their formative youths. Or a record shop, or book store, or comics shop, or long defunct arcade, etc. which sparked their interest in some form of the creative arts. But you've got one. And I defy you not to get nostalgic and corny and all when flashing back to it and the (no exaggeration to say) maybe life defining times you had during your "back in the day" there.


At any rate I posted something on Facebook yesterday about noticing increasing gray hairs on my head. And perhaps this is just another rendition of the same thing - the much smaller scale written version of how Terry Gilliam's wife once playfully accused him of making the same movie over and over and over again. And if you really think about it, she's right. Look closely enough at BRAZIL, BARON MUNCHAUSEN, THE FISHER KING, 12 MONKEYS and others, and there's a very striking (I wouldn't call it "sameness", but) thematic similarity running through the central nervous system of them all. And I guess this is kind of along the same part and parcel lines as the "reflecting back and noticing things as you get older" nature of the "gray hairs" thing. In fact like the "gray thing" this too started as a social media posting - just one which got way too damned long, so it was placed here. People will tend to click away from a long social media posting but will often be more inclined to read a short blog, ... even if that blog posting is in actuality longer than the social media one. Go figure, huh? But I've digressed enough. On to it ...


A Facebook friend in Chicago made comment this weekend about the love of Windy City fans for The Uptown Theater, and how they hope it can be saved from the wrecking ball. And it brought memories flooding back ... . Well, "flooding back" isn't really accurate as the memories are still vivid, and a very important part of my life (creative and personal) to this day. We had a magnificent theater like that in Philadelphia - a gorgeous art deco palace at 19th & Chestnut Streets in Center City. When it opened in 1928 it was called The Boyd Theater. Films like GONE WITH THE WIND, THE WIZARD OF OZ and others had their premiere runs there; it was one of the original 3-strip Cinerama theaters in the nation; and it was the premier tri-state area (Philadelphia, South Jersey, Delaware) 70mm Roadshow palace as well - with BEN-HUR (Chuck Heston showed up in person on opening night), DR. ZHIVAGO and others running there in their original formats.


In 1971 The Boyd was taken over by a local chain called SamEric Theaters, which has since been taken over by The Regal Entertainment Group - the owners of Regal Cinemas, Edwards Theaters and United Artist Theaters. And that's where and when my personal love of the place grew as it was the largest screen in three states for quite some time while I was growing up. To this day I've been to IMAX theaters which couldn't hold a candle to a great 70mm print at the SamEric. Even when I lived in South Jersey, and a film was playing at the local mall not far away, I'd take the bus or (later when I got my license) drive 20 to 30 miles to see it at "The Eric" (that's what the locals called it) or "At 19th & Chestnut" (it's former pre-GPS film fan designation) just because of that screen and that ohhhh-so-immersive wraparound sound.


To this day I've fond memories of seeing THE EMPIRE STRIKES BACK, RAIDERS, TEMPLE OF DOOM, A VIEW TO A KILL, THE LIVING DAYLIGHTS, an awesome all day STAR TREK film marathon and more at the Eric. And I always regretted not being able to see SUPERMAN: THE MOVIE or TRON in their original 70mm runs there. And, oh yeah, films like Jonathan Demme's 1993 drama PHILADELPHIA had their world premieres there too.

When multiple screens became all the rage (and an economic necessity), instead of chopping up it's gorgeous main theater, the SamEric group actually sprung the mega bucks to knock down a lobby wall and add a new annex onto the existing building with three smaller screens. Hell yeah! But of course as such when something like RETURN OF THE JEDI, OCTOPUSSY or INDIANA JONES AND THE LAST CRUSADE opened and was playing on the main mega-screen and one or two of the other screens (and back then it was the same admission price for all of them) it was incumbent upon you to know which times were for which of the four theaters.

One of the things I most loved about The Eric / The Boyd (but not everyone did) was what a "chameleon"-like theater it was in the 1980s - 90s. Depending on what was playing (and what day and / or time of day you went) The Eric was the place for a night out with family or with a date, or it was the slightly grander scale version of a grindhouse theater in all it's heyday glory, but with a seven or so hundred (rather than two or three hundred) strong crowd hurling comments at the screen, ... and sometimes in unison. 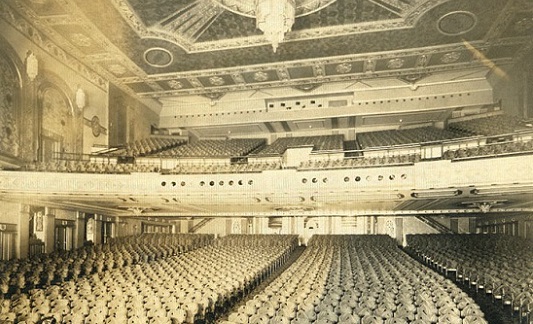 I remember how on the Friday night I saw COMING TO AMERICA there with a date it was more a multi-ethnic / multi-age "family night out" kind of crowd - with everyone lined up at the ice cream shop across the street before and after each show. And how on other Friday nights or Saturday afternoons films like THE SERPENT AND THE RAINBOW, CHILD'S PLAY, THEY LIVE, FATAL ATTRACTION, SCREAM and others turned it into the biggest "interactive shout at the screen" fest outside of THE ROCKY HORROR PICTURE SHOW and Times Square New York of the 1980s. As said, some patrons didn't dig the (at times) schizoprenic nature of The Eric. But if you loved EVERY KIND of film (and I always did) it was a stone cold blast. And yeah, sometimes "stoned" was the operative word as many in the audience were unequivocally convinced that was the only state to be in in order to watch certain kinds of films. Hey, life in big city, huh?


To this day I believe part of the "group psychology of enjoyment" inherent and at work at The Eric was that - not unlike with an old school Vegas magic act before it begins - the theater had these huge heavy dark red velvet curtains which would open (and once or twice done so manually by two guys on stage when the motor was on the fritz) as the theater lights dimmed. There was something magical about that. You could feel the rise in expectation within the audience, especially when they all started cheering and clapping and hootin' and hollering when it did. Then if the film itself had some kind of recurring, recognizable and beloved cinematic opening - like the James Bond gun barrel or the STAR WARS "A Long Time Ago In A Galaxy Far Far Away" prologue - ohhh, Mama! - there was a deafening cheer as the audience went 100% total and complete absolute bonkers apesh*t. And that was more infectious than the ebola virus. 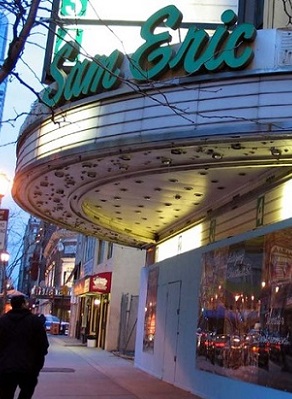 Hell, the truth is that some films (CHILD'S PLAY 2 anyone?) were made 10 times more enjoyable by just seeing them in that particular theater and with a particular audience - one which was just "into it". And to this day when I'm writing a script, and looking for a "vibe", or if I'm attempting to describe what "kind" of a film I'm envisioning to someone, I'll often refer to it as a "19th & Chestnut movie", then I'll explain why, and they totally get it.

The last film I saw at The Eric / The Boyd before it closed was 1998's X-FILES: FIGHT THE FUTURE. And after it brought those velvet curtains together for the last time there was a fifteen + year effort by many to have the theater designated an historical site in order to save and preserve it. But to no avail.

I truly hope Chicago's beloved Uptown Theater can be saved from the ball and preserved - as I hear Joliet's The Rialto (about an hour outside of town) managed to be - because, as much as I truly love today's IMAX venues and digital sound and all, there's still nothing quite like watching a movie in a grand ol' cinemadrome like The SamEric / The Boyd. Tom Hanks was even blown away by the place during the Philadelphia World Premiere of the movie PHILADELPHIA in 1993 - surprised and excitedly exclaiming, "Wow! A real movie palace!".

Hell, in places like that even going to the bathroom, or stepping out into the lobby to get a refill of popcorn, was a hell of a theater-going experience.

See 'ya in the balcony. And, hey, no hanky panky up there.  The ushers with the flashlights are watching.  ;) 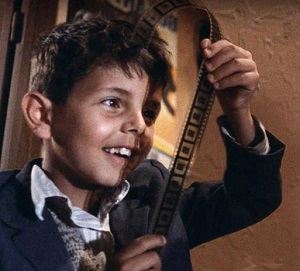 More on The Boyd / SamEric Theater @