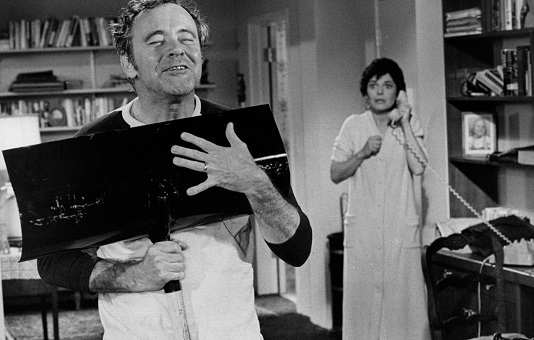 
VAULTED TREASURES: MOVIES YOU NEVER KNEW ABOUT, YOU FORGOT,
... OR YOU FORGOT TO LOVE MORE THE FIRST TIME AROUND! 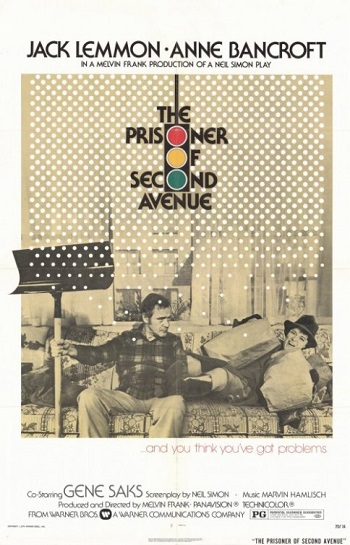 
Okay, oddball analogy ahead! If there was ever a "George Gershwin" or "Miles Davis" of American theater, I always felt it was Neil Simon. You know, someone who approached theater - that which many for so long considered the members-only purview of the high falutin' "learned aficionado", then (in Simon's case, like a bespectacled, Depression-era-born-in-the-Bronx, Jewish Prometheus), swiped it's artistic fire from Olympus ... . I mean, from The Great White Way, ... and brought it down to the shirt-stained, concrete-and-parking-meter world of the Great Unwashed. For that I'll be eternally grateful as I honestly don't think today we'd have a Steppenwolf Theater, Groundlings, Upright Citizen's Brigade or numerous other companies had we not first had a Neil Simon. I guess his passing hit me more personally and poignantly than I figured it would because I was (and still am) one of those concrete-and-parking-meter-raised "Unwashed" who in his younger years didn't know (or give) a damn about theater until Neil Simon's wit regarding, and compassion for, the human condition tickled my funny bone, scratched my brain, and goosed my gluteus literarius into making me want to know, do and be more within a creative existence of my own.


Why something becomes a personal favorite "whatever" is an extremely subjective psychological, emotional, part nature / part nurture, ... and hell, maybe even part spiritual ... mumbo-jumbo mashup. And as such, while I too love Mr. Simon's more popular plays and films like THE ODD COUPLE, BAREFOOT IN THE PARK, THE OUT-OF-TOWNERS and BILOXI BLUES as much as the next fan, my all time favorite remains THE PRISONER OF SECOND AVENUE. Essentially it's a hilarious story about a guy who has a nervous breakdown. And what the hell's funny about that, right? Well, more accurately (as if that first description wasn't dark enough) it's about a man who feels as though he's losing his manhood - his sense of purpose for being - and he doesn't know what to do about it.

Simon wrote THE PRISONER OF SECOND AVENUE back in the "suck it up and man it out" days before clinical depression was accepted by the general public as a genuine mental disorder with psychological, genetic and environmental causes. And while it first debuted as a very successful play in 1971 (starring Peter Falk & Lee Grant, and directed by Mike Nichols - Wow, what a trio!), it was the 1975 film version - directed by Melvin Frank, and starring Jack Lemmon & Anne Bancroft - which proved to be my gateway drug into Simon's den. Then as the years passed, that patented uncut bag of canny dialog, uber-perceptive characterizations and more I first sampled on SECOND AVENUE would, in other stories spooled from the typewriter of the Bronx Bard, become my own personal stash of SuperFly TNT. Oh, what the hell! I figure as long as we're talking about the era of the 70s, why not? Haha! But I digress. 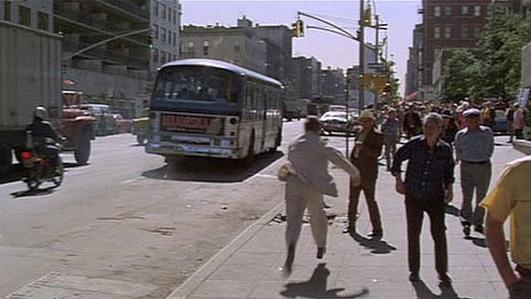 Anyway, Lemmon and Bancroft are slightly upper middle class couple Mel & Edna Edison - who live comfortably enough on the Upper East Side "until" Mel loses his job during the 70s recession, finds that at his age he's unqualified for any other kind of work, then gets caught up in a discombobulating emotional centrifuge of trying to maintain his dignity as a husband and as a man while finding himself for the first time needing to reach out to others for help, including his older brother Harry - portrayed by Broadway actor / director Gene Saks. 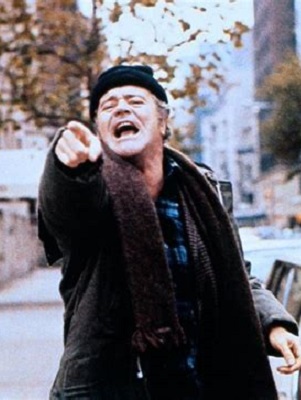 "Until" is in quotations above because the fact is even before Mel loses his job there are indications that he is (in his own words) "slipping" and becoming mentally and emotionally "afraid" in life in general. During one earlier fateful evening when unable to sleep he confesses to Edna how he feels the world is closing in on him.  And it is in this retrospective light it dawns on us that the action of Mel's firm kicking him to the curb after 22 years was merely the catalyst which ignited / brought screaming to the surface the condition Mel had been so good at hiding for so long.

The play and film refer to Mel's malady by 70s era nomenclature - a "nervous breakdown'. But with the benefit of 20/20 hindsight we well recognize the unspoken opponent with which he "goes to the mats" as being what today would be diagnosed as depression. As such, given the delicacy of the subject matter (even terror of it as exemplified in one particular late night scene), and considering the era in which the film was made, the kindness, humor and intelligent social foresight with which Simon and director Frank treat the characters, narrative and said subject is nothing short of jaw-dropping. This is why the film continues to blow me away to this day.

Unlike other more simplistic, if enjoyable, comedies about hard times falling upon the well-to-do (and FUN WITH DICK AND JANE - '77, TRADING PLACES - '83, and THE NEW AGE - '94 are the first which spring to mind, ... although Mel & Edna are no where near as well off as the characters in those films), THE PRISONER OF SECOND AVENUE doesn't feature a pair of smug and selfish dilettantes, as do those others, who deservedly crash and burn because of a self- delusional sense of entitlement. 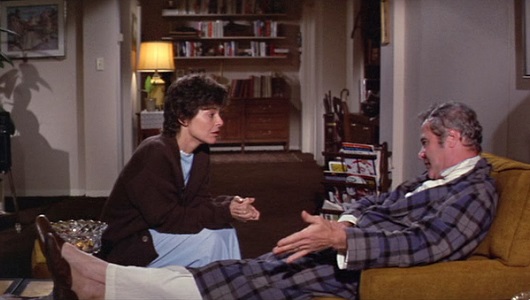 Lemmon and Bancroft are decent hard-working people who take the bus, do their own laundry, manage to make ends meet, and every now and then can take a vacation. So, while fate seems to enjoy the sight of it's size 12 Doc Marten lodged firmly up Mel's ass, we absolutely do not. And as Murphy and his ever escalating law proves itself stubbornly in flux in the Edison's lives, we can kind of understand rather clearly and easily why - combined with the crumbling of Mel's mental and emotional building blocks - he, in an Ahab-like act of rebellion comes to declare an ultimately impotent war against the City of New York in particular, ... and the world and fate in general. Yeah, we get it!


Via watching THE PRISONER OF SECOND AVENUE roughly 30 times in one month on HBO as a(n) (admittedly odd) kid, Simon's film would - along with Spielberg's THE SUGARLAND EXPRESS and Blake Edwards' THE RETURN OF THE PINK PANTHER (both of them not only rife with, but dependent upon "snappy dialog") become among the first movies I memorized. It was certainly the first play, as I later discovered upon picking up the published version at the Willingboro Public Library. And as the film remained faithful to the text of the original work, that weird kid would also unexpectedly become the beneficiary of a nifty early lesson in the craft of visually adapting source material as he realized the movie version, while near verbatim dialog-wise, had "opened up" the story geographically by placing selected (and additional) sequences outside the limited logistics of a single apartment interior stage setting. 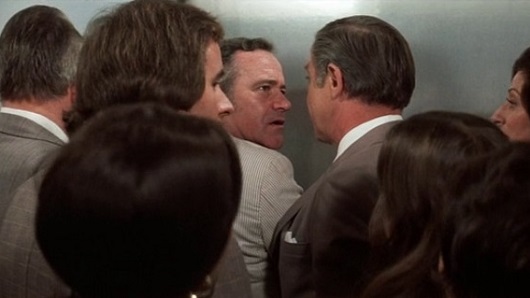 My stepdad was an interstate trucker. And I'll never forget watching the relationship strain between him and my mother over a particularly harrowing span of time for our family when during a months-long Teamsters strike a) he literally risked death by taking non-Union hauls in order to keep from losing our home, and b) my mother went back to school then took crappy job after crappy job to keep the family financially together when even non-Union trucking gigs proved unavailable. I'd seen the film version of Shakespeare's THE TAMING OF A SHREW in school, and was amazed at how much the character interplay at times reminded me of my parents and their friends. But THE PRISONER OF SECOND AVENUE was much more contemporary and specific in that regard. 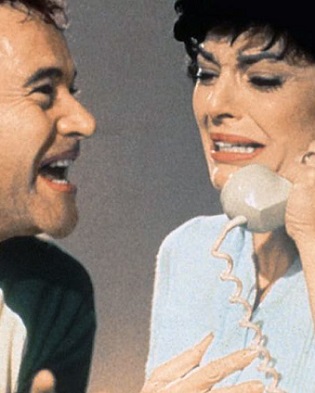 Whereas SHREW reminded me of real life, SECOND AVE was much more real life. And that was a huge revelation to a young and creatively hungry mind at the time familiar with little more than James Bond and Ray Harryhausen movies or the occasional Saturday afternoon Amicus or American International horror double bill. As I already knew of Simon's THE ODD COUPLE from the movie and TV series, I set out to learn more of him, then over time as a result ended up branching out and falling in love with other playwrights such as Sam Shepard, August Wilson and David Mamet. So, thanks, Neil, for escorting me into that world which, while still at a young age, made me want to strike out and try my own hand at spinning prose and doling out dialog.

Those who are observant realize how an ever recurring theme within the work of Shepard, Wilson and Mamet is that whole "definition of manhood" thing - and the dichotomy between the real vs. illusionary concept which society at large tends to claim is real. This theme very much runs through the central nervous system of THE PRISONER OF SECOND AVE. But whereas with the other writers it tends to be examined in a dark, often profane and even spiritually broken manner, with SECOND AVE. it's done in a damned hilarious one. It may be cliche' to say "this one makes you laugh and cry". And yeah, I hate that hoary, overused P.R.-sounding, dusty horsesh*t verbiage too.  But in this case it's no dusty horsesh*t. 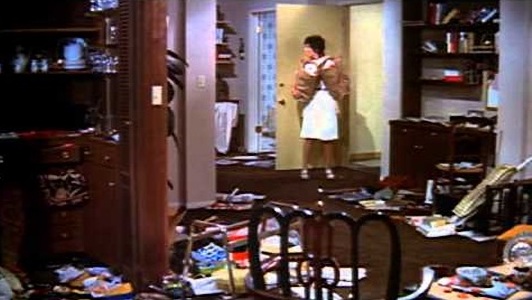 Unexpected (and particularly heartbreaking) in this regard is how Bancroft's Edna becomes the family anchor as Lemmon's Mel looses his mental and emotional grip. Then later, as the mounting pressures on her (which includes not only keeping things financially afloat, but keeping Mel from slipping into crippling depression) begins to take their toll, it's Mel who begins to bounce back in time to keep her from falling. 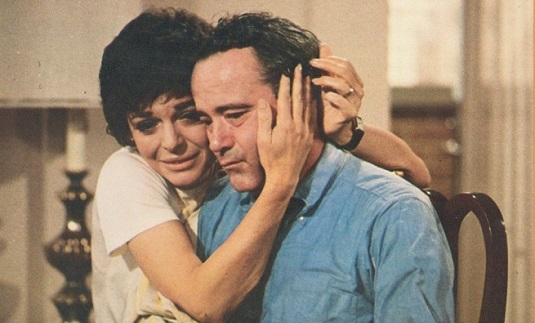 There's a wonderful story for grown ups here - stunningly written, performed and narratively braided within the lush, full and flowing locks of comedy and pathos. It's a masterclass in damned good writing for actors, and damned good actors performing damn well written material.

If you've never seen THE PRISONER OF SECOND AVENUE, I can't urge you enough to give it a look-see. I think you too will come away saying the same as did numerous critics during the time of the play's original debut: that the great "joke writer" Neil Simon had impressively come of age at a time when society at large needed his alchemical mix of belly laughs and sincerely earned crocodile tears more than ever. Don't let this PRISONER escape.

Gene Saks, who portrays Lemmon's brother, Harry, directed Simon's THE ODD COUPLE and BAREFOOT IN THE PARK on Broadway. And the voice of Lemmon and Bancroft's unseen upstairs neighbor (the inspiration for FRIENDS "Mr. Heckles"?) is character actor Joe Turkel - perhaps best known as "Bartender Lloyd" in THE SHINING and Dr. Eldon Tyrell in BLADE RUNNER.

There was a theatrical revival of the play in 2010 starring Jeff Goldblum & Mercedes Ruehl.
Would have loved to have seen that one! 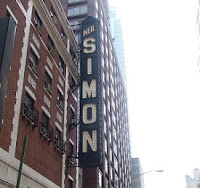 Explore The GullCottage / Sandlot @
http://www.gullcottageonline.com
Posted by Craig Ellis Jamison at 11:03 AM No comments: